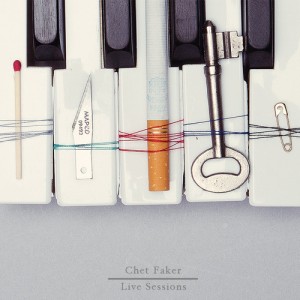 Chet Faker is an exciting new artist who hails from the tight-knit disco and house music scene of Melbourne, Australia and who creates a unique brand of electronica-soul.

Chet Faker signed a deal with Downtown Records who released his debut EP, ‘Thinking in Textures’ last year. The EP went on to win ‘Best Independent Release’ at the Rolling Stone Australia Awards and ‘Breakthrough Artist of the Year’ at the Australian Independent Records Awards, while Chet Faker himself went on to win ‘Best Independent Single/EP’ at the aforementioned awards. Most recently, Chet Faker contributed vocals to the Flume track “Left Alone” (read our review).

Recorded in the old Buttery Factory in rural Victoria, Australia on “Archangel” and “No Diggity” Chet Faker doesn’t merely “cover” these songs (though any attempt of these songs is no mean feat…) he completely owns and reworks them as if they were his own compositions.

Take a listen to first track “Archangel” and you’ll be hard pressed to find any traces of the Burial classic. While the original does of course contain soulful vocals, here with just electronic piano and vocal, Chet Faker turns “Archangel” into a singer/songwriter R&B infused number. Around 3:15 an up-tempo beat and strings accompany and give the song yet another unique twist.

Book-ended between the two covers is “Love and Feeling“, which showcases his strengths as a brilliant writer and gives you further appreciation of the work he’s has done on the two covers;  Chet Faker has literally made “Archangel” and “No Diggity” sound like tracks from his own EP. All the groove and soul of the studio version is elegantly and effortlessly delivered live.

“No Diggity” is the final track and again characterised by electric piano and vocal, Chet Faker transforms the song into a soul original somewhere between Aloe Blacc and Gnarls Barkley.

With a pristine production to boot, which actually sounds better than a lot of bands’ studio recordings, this 3-track Live EP is a must hear. Chet Faker is an extraordinary talent.

Listen to the live EP below: