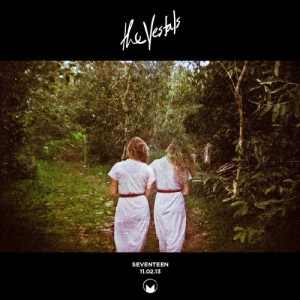 It’s clear from the onset that the Welsh five-piece are all about earnest pop songs with an air of melancholy. Both tracks are radio-ready, exhibiting anthemic qualities. “Perfect Pain” is the edgier of the two tracks – an up-tempo number with jangly rhythmic guitars, strong vocal hooks, and driven by a synth melody that gives the song its strong 80’s flavour. “Perfect Pain” has elements reminiscent of The Pains of Being Pure At Heart circa ‘Belong’ (think “Heaven’s Gonna Happen Now” or “The Body”) but with less grit.

On the flip side, “Seventeen” begins with an epic and familiar sounding 80’s style guitar melody and immediately takes up home in your brain. Along with its arena-sized chorus, here The Vestals draw to mind current buzz band The 1975 with whom they share a similar appeal. Like “Perfect Pain” before it, “Seventeen” has strong 80’s accents – in fact, you can just hear the song in an 80’s teen movie.

The Vestals use the tried and true ABABCA pop arrangement and although they demonstrate their ability to craft solid pop-rock songs, “Seventeen” in particular does run the risk at times of sounding a tad too formulaic or too commercial-minded. Luckily, its irresistible charm saves it.

What the songs may lack in originality, The Vestals make up for it in perfection. Their songwriting, production, and execution are all top shelf.

As far as guitar driven indie-rock/pop goes, you can’t imagine a more perfectly crafted debut. The double A-side single ‘Perfect Pain / Seventeen’ will be released as a 7″ single on 11 February, 2013 via Killing Moon Records.

Stream both “Perfect Pain” and “Seventeen” below via The Vestals Soundcloud:

Watch the video for “Seventeen” below:

Watch the video for “Perfect Pain” below: