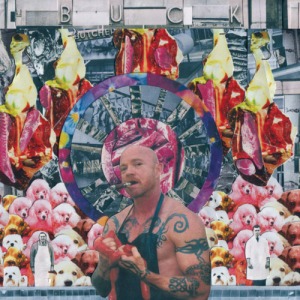 In early December Stuart Warwick gave a taster of his forthcoming album in the form of an exquisite and spellbinding new track entitled “Sailors” (read our review). The track featured richly layered strings, piano, and chimes that combined with jazz-like drum brush strokes to create a dark and elegant composition recalling Perfume Genius meets Rufus Wainwright with hints of Bat For Lashes.

‘The Butcher’s Voice’ is the second long player for Warwick following 2010’s self-released ‘The Ordeal’. The album is made up of 11 tracks which centre around piano and vocal then tastefully decorated in a combination of strings, harps, hand-claps, harpsichord, pounding drums, and/or brushes with jazzy and baroque-pop accents.

A concept album of sorts, the theme is one of gender identity. As stated in the press release, the album is “a heady mix of bittersweet lost-love songs and Warwick’s darkly comic, twisted and lewd lyrical wit” uniting Bat For Lashes meets Tim Burton style fantasy (none more evident than in the circus-like “Dreams of a Tomato Can”) with the confessional unease revealed in the work of Perfume Genius.

The aforementioned “Sailors” starts the proceedings, setting the tone for the record and exhibiting Warwick’s accomplished and complex songwriting skills (read the full review of “Sailors”). “Birds That Don’t Fly” follows and begins with a Charlie Brown style jazz style piano groove before developing into one of the most gorgeous and bewitching numbers of the album. Riddled with beauty and heavy on emotion, this track encapsulates all the magnificence that is ‘The Butcher’s Voice’.

Warwick’s gorgeous and heartfelt vocals are on full display in the bare-boned, mournful and deeply moving “Cherished Muscle” while the title track, an album highlight, is the most immediate and pop-driven track on the album. The Florence and The Machine style percussion that sounds throughout the chorus of the title track elevate the song into euphoric territory.

Both sonically and in mood, “Man With A Pussy” draws to mind early Keane (think b-side “She Opens Her Eyes)” meets Rufus Wainwright and is another gorgeous soul-bearing number . “Dame Binned Cow” opens with an electronic beat, harpsichord and vocal melody that initially recalls Thom Yorke’s ‘The Eraser’ before it produces one of the biggest choruses on the album and thus becoming one of the most direct and pop moments.

The haunting and supremely melodic “Melancolonica” is an instrumental number that would be right at home as the soundtrack for the film, ‘Never Let Me Go’ while closing number, “The Fairer Sex” is a delicate, acoustic-led number ending the album with a hush.

It’s hard to imagine a more elegant album will be released in 2013 than this. A simply stunning and richly rewarding record, ‘The Butcher’s Voice’ will released as a digital download and limited edition ‘pop up’ CD through Warwick’s own Laugh Riot Records on January 14, 2013. The album will also be released on vinyl through Faux Discx. Pre-order now.

Update 14 February, 2012: The video for new single “Crush” has just been released. Watch below: