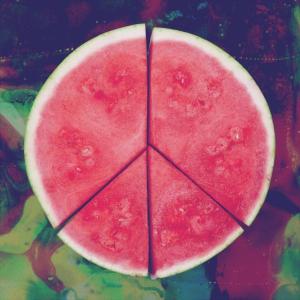 Along with fellow UK newcomers Palma Violets, Birmingham indie-rock quartet Peace are being touted by critics and fans as the saviours of guitar music with the likes of NME and Hue Stephens at BBC Radio 1 all on side.

‘Delicious’ is the band’s debut EP. Back in August, Sound Advice reviewed the track “California Daze” (read our review), which is one of the four tracks that make up this EP.

Opening track “Ocean’s Eye” is a soon-to-be indie anthem with a sound and style most reminiscent of Ocean Colour Scene. At only 2:21 in duration, it wastes no time grabbing hold of the listener with its hooks yet has enough time to introduce some interesting guitar textures and percussive rhythms. Vocally, Harrison Koisser recalls Luke Pritchard of The Kooks, not just here, but on all four tracks.

“Bloodshake”, which originally surfaced online in early 2012 as “Bblood”, is your classic indie-rock number and immediately recalls The Maccabees. Check out the section that occurs from 2:30 until end, which starts out as a quiet break-down and builds quickly to a Foals ‘Total Life Forever’ type section with massively delayed, noodly guitar lines.

“California Daze” follows next and well, hasn’t it become quiet the anthem in next to no time? Recalling The Kooks primarily, “California Daze” is based around Jeff Buckley style guitar chords while structurally exhibits similar qualities to the Chili Peppers ‘Under The Bridge’.  Drums don’t actually enter the song the 1:40 mark and when they do the song adopts on a strong 60’s flavour with some Beatles-esque harmonies, which add a psychadelic edge.

But it’s during the final track that things really get interesting and Peace offer us a glimpse of what they’re capable of and perhaps where they’re headed. The sonic journey that is “1988 (Delicious)” is 10:09 in duration and possesses Foals  style experimentation with an array of moods, textures and sounds.

With all four tracks varying greatly in style and direction, ‘Delicious’ is the sound of a band still finding their feet but certainly a band with massive promise.

‘Delicious’ was released on 7 September, 2012 and is available now.

Watch the video for “Bloodshake” below: